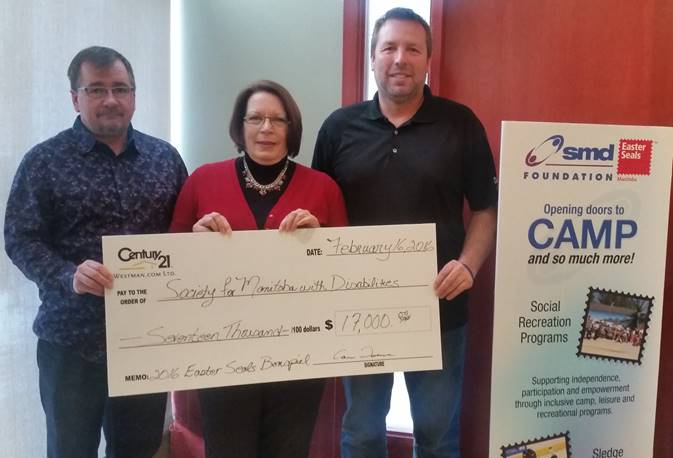 Thanks to the generous support given by local businesses and participants of the annual Easter Seals Send Kids to Camp Bonspiel held on February 6, 2016, CENTURY 21 Westman.com Ltd. announced the office was able to donate $17,000 to Easter Seals!

The very successful and fun Annual Easter Seals curling bonspiel fundraiser has been held in Brandon, Manitoba for the past six years. Organized by Cam Toews with the help of many volunteers, the event has raised over $62,500 in those six years. As a top contributor to Easter Seals, the CENTURY 21 System has helped thousands of children go to camp and enjoy friendship and fun in the summer.

“It is a pleasure to donate our time and resources to raise funds for our local Easter Seals chapter. Fundraising events such as our Curling Bonspiel provide our sales associates the opportunity to give back to the local community while raising awareness of this worthy cause,” said Cam Toews, event organizer. “It is a great feeling to know that our contributions go directly toward helping people with disabilities in our community achieve greater independence.”

Century 21 Westman.com’s fundraising efforts are a part of a collective effort of the entire CENTURY 21 System that dates back to 1979 and in 2015, the local company was recognized for being #17 of the “Top 21” North American Fundraisers! The independent brokers, managers and sales agents of CENTURY 21 in the U.S. and throughout Canada have raised more than $108 million for Easter Seals since affiliating with the organization.