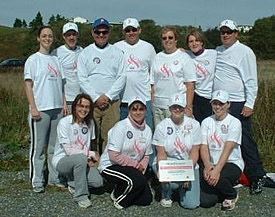 For the second straight year, TEAM RE/MAX St. John’s participated in the annual CIBC Run for the Cure. In 2005, the team raised more than $6,000 and was recognized with a CIBC Corporate Spirit Award and also received the Cox, Hanson, O’Reilly, Matheson “Business 101 Award” for the team representing a company with fewer than 100 employees that raised the most contributions.

This year TEAM RE/MAX St. John’s got out of the gate early and quickly rallied a total of 35 team members. Fund-raising began at a fast and furious pace. The office provided technical support so members could set up online donation pages. Some participants raised more than $1,000 each. To bolster fund raising efforts, the office sold pink RE/MAX Sold on a Cure Bracelets and balloons, and held a contest where participants had to guess how many balloons were in a RE/MAX Sales Associate’s office.

“The participation and support was phenomenal,” said team captain Vaughan Underhay. “The icing on the cake though was when our Broker owners Kevin King, Jim Burton and Keith Bradbury agreed to match the fundraising efforts of all TEAM RE/MAX St. John’s members dollar for dollar with a corporate donation. That pushed our grand total to over $14,000 raised!” The route was around historic Quidi Vidi Lake in the east end of St. John’s and marked the 10th anniversary of the Run for the Cure in the province’s capital. Most participants walked the 5km course, but some TEAM RE/MAX members elected to run the course. “We figured they had appointments or Open Houses following the event!” joked Underhay. Over $300,000 was raised at the local event under bright sunny skies.

“Organizing the event was most interesting. Of course every year there are new faces and there are not many people who have not been touched by breast cancer either through a family member, co-worker, or someone you know,” said Underhay. “Last year my sister in law passed away. She suffered terribly. It was horrific watching her go through it and even harder seeing how it affected my wife, mother in law, sister in law and the whole family.”

TEAM RE/MAX St. John’s became involved in the annual Run for the Cure after the RE/MAX annual conference was held in St. John’s. RE/MAX is a very strong supporter of the Canadian Breast Cancer Foundation through the Sold on a Cure program, which allows RE/MAX real estate professionals to voluntarily make a donation from the sale of each home directly to the Foundation. At the conference, Underhay struck a friendship with Christine Martysiewicz of RE/MAX Ontario Atlantic Canada Regional Office and her husband Leon, who later asked if Underhay would captain the local team.

“It didn’t seem like much work and it was a cause that was near to me plus I just couldn’t say no to Christine! It was a great experience but the biggest impact was seeing the thousands of people who turn out for the event and make their way around the lake in support of breast cancer research,” said Underhay. “I truly love helping people and that’s probably why helping organize and being a part of TEAM RE/MAX St. John’s is a fit for me.