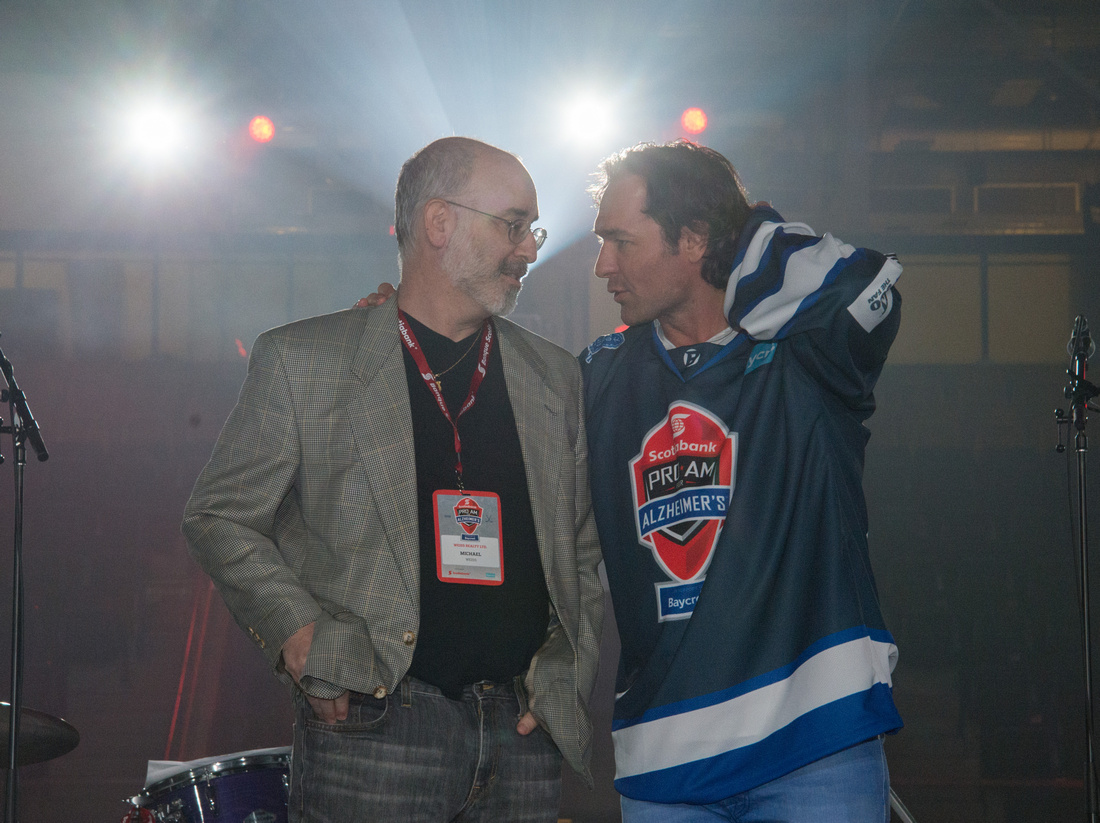 At a charity hockey tournament featuring former NHL greats such as Wendel Clark, Owen Nolan, Adam Foote and Paul Coffey, the Average Joes like REALTOR® Michael Weiss got high praise from the pros.

Weiss, owner of Weiss Realty Ltd. in Toronto, raised more than $13,000 leading up to the Scotiabank Pro-Am for Alzheimer’s held May 14 and 15 in support of Baycrest Health Services, a leader in the fight against Alzheimer’s. His team made up of REALTORS® ended up raising $41,000 mainly by reaching out to past clients, family and friends. This year, more than $1.65 million was raised by 33 teams that took part bringing the grand total of the tournament’s 11-year run to nearly $30 million.

THANK YOU to all the players, alumni, sponsors & donors for helping us #StickIt2Alz in 2016!! See you next year! pic.twitter.com/Cnd6ePebqZ

Weiss said he has been a part of the tournament since its inception because Alzheimer’s – like it has for many Canadians – affected his life.

“My grandmother died of Alzheimer’s so I wanted to do it in memory of her. Now my mother-in-law is nearing the end stages of Alzheimer’s and it’s hitting home once again,” he said.

By playing every year, Weiss has gotten to know some of the players, including multiple Stanley Cup winner Mike Krushelnyski.

“I’ve known Mike for a couple years,” Krushelnyski told the Canadian REALTORS Care® Foundation. “He does such a great job of raising money so when we do these things we try to get him a couple extra signed pictures or hats that he can auction off. I can’t thank him enough for all he does.”

Weiss said he enjoys competing against players who have hoisted hockey’s Holy Grail, even though his end goal is to outdo the money total he raised the year prior.

“Hearing the stories from these guys is worth the price of admission alone,” Weiss said, who had Darcy Tucker, the gritty former Toronto Maple Leaf, on his team for this year’s tournament.

“Darcy told us he had only ever played against his son once before so we told him to bring him to the tournament the next day. His son ended up stealing the puck from him once and scored. Darcy, this huge celebrity, was just so excited at that and it was thrilling to see the two of them interact on the ice.”

Weiss’s team didn’t make it to the finals, but he said any of the people who took part will tell you that’s not the objective of the tournament.

“It’s about raising money and the tournament is always looking for new teams to join or for people to donate even after we’ve played.”

Baycrest’s Rotman Research Institute, one of the world’s elite neuroscience labs and the beneficiary of the funds, is developing a virtual brain to study the effects athletic impact and aging have on dementia.

Learn more about the Scotiabank Pro-Am for Alzheimer’s.

Four-time Stanley Cup champion Mike ‘Krusher’ Krushelynski took time to speak about the tournament with the Canadian REALTORS Care® Foundation recently. Below is a Q&A with the former NHLer.

Matt from the Canadian REALTORS Care® Foundation: Why did you get involved with the Scotiabank Baycrest Pro-Am for Alzheimer’s?

Mike Krushelnyski: “Every charity is important, but as you know Alzheimer’s is growing at an alarming rate. The older I get the more I see it as I have friends and their parents who are going through it. Unfortunately we are all going to be affected by Alzheimer’s or dementia until they find a cure. It’s a debilitating disease that no one should have to go through so I’ll do what I can to help.”

Matt: Other than helping a worthwhile charity, what’s your favourite part of the tournament?

Mike: “It’s nice to see the guys and hang with my team and tell them stories. I get asked a lot about how I scored that double overtime goal (as part of the Los Angeles Kings during Game 6 of the 1990 division semifinals against the Calgary Flames). That was my luckiest golf shot ever. I never saw the puck. I was diving and had a guy on top of me and it ended up being the game-winner. So it was pure luck.”

Matt: What NHLer do you look forward to playing with the most?

Mike: “Anybody old! I hate playing against guys like (former Toronto Maple Leaf) Danny Daoust and (Stanley Cup winner) Gilbert Dionne. He’s a scoring machine. Same with (three-time Stanley Cup winner) Mathieu Dandenault. He goes 1,000 miles per hour and I’m like, ‘I’m never going to catch these guys.’ When I’m with the alumni and we’re together we can compete against any age, but when we get split up by ourselves, there’s no chance!”

Matt: But you were drafted first overall in the Toronto tournament by the Canadian military team. That says something.

Mike: “Yeah, it was my first time being picked first overall! I went second in Edmonton once. I’ve been lucky enough to go to Kuwait with the military to meet the troops and see what they do and visit a couple of air bases so that probably helped.”

Matt: What’s a memory that sticks out for you from this year’s tournament?

Mike: “The police force we played the one game was really kind. Our team had guys who hadn’t put on skates before. Our goalie was from India and was letting in pucks that should have been icings. Of course, it was all fun and these guys loved it, but I won’t forget setting this one guy up with a beautiful pass. Nobody was near him and he went to wind up, did a pirouette and just fell backwards. But this is what it’s all about. The other team could have beat us easily but we ended up winning that game. Kudos to everybody that raises money because the tournament gets funnier and funnier and more fun every year.”