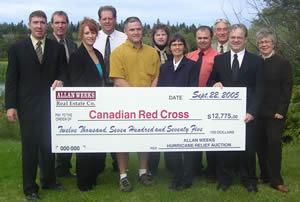 In September 2005, Hurricane Katrina hit the city of New Orleans and the State of Louisiana. The devastation caused by the hurricane left many Americans without a home or job to return to. Thousands had to rely on disaster relief organizations such as the Red Cross in order to survive. This left organizations scrambling for financial assistance in a year plagued with several large-scale disasters around the globe.

After watching the horrific images fill her television screen, Marleen Hately – a REALTOR® in Prince Edward Island – suggested to her colleagues that they should do something to help out the people impacted by this tragedy. The REALTORS® with Allan Weeks Real Estate in Hunter River, PEI decided to host a benefit auction in support of the relief effort. The date was set for two weeks later – September 17, 2005.

“We held a staff meeting to organize this effort and we were off and running,” said Allan Weeks, Owner of Allan Weeks Real Estate. “Each individual agent, as well as the office staff was responsible for soliciting 20 items to be auctioned off.  All of the businesses were very generous in donating items and services.”

Staples photocopied approximately 4,000 flyers advertising the auction, and Canada Post helped the REALTORS® distribute the flyers to every household and business in the area. The local newspaper also donated a couple of ads to help promote the auction. The facilities to hold the auction were graciously donated by the New London Community Complex.

‘It was a dark, windy, rainy evening but the community rallied around and supported us,” said Weeks. “We partnered with the Canadian Red Cross and all monies raised was donated to their Katrina Relief Fund. It was a tremendous amount of work in two weeks but it was all worth the effort!  We were able to raise and donate $12,775 to the Canadian Red Cross.”

“The success of the evening would not have been possible if not for the generosity of local businesses and community members,” added Weeks. “Hunter River is far from New Orleans and other areas that were hit, but I think I speak for many when I say that it feels like it hit close to home. I’m truly honoured to have been a part of this effort.”