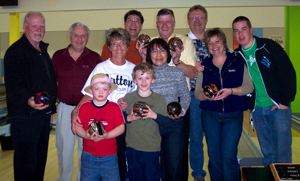 “An associate through the Rotary Club suggested to me the Big Brothers Big Sisters organization,” shared Howard. As the treasurer of the Institutional Advertising Committee at the office, Howard encouraged fellow REALTORS® to get involved with the Bowl for Kids Sake and to contribute as a group. The office won two trophies for collecting the highest amount of pledges.

The event took place over the course of two weekends. Howard and other Sutton REALTORS® were in charge of decorating and setting up the bowling alley. 30 teams from various organizations bowled together, raised funds for a great cause and had fun with family and friends.

As a member of the Rotary Club Board of Directors in Lethbridge, Howard is actively involved in the popular Black Tie Bingo and Auction fundraiser. A loyal member of the Knights of Columbus, the Breakfast Club, a proud father of two and a grandfather, Howard revealed his secret: “Sometimes it’s difficult to juggle my business and volunteering, but the feeling of fulfillment, when I give back to the community, is immense.” His goals for next year’s Bowl for Kids Sake include convincing other local real estate companies to participate and exceeding this year’s contribution of $47,000.