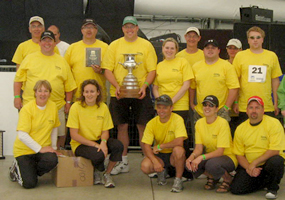 The team from CENTURY 21 The Professionals of Calgary raised over $24,000 for the Easter Seals 24 Hour Relay, held June 9-10 at Canada Olympic Park.

“Century 21 The Professionals wanted to contribute in a bigger way,” said owner Carol Bezzag. “We all wanted to give back to the community which has been such a great part of our success.”

The entire office supported the 24 Hour Relay, donating either time or money, and the team participated for the full 24 hours. Eleven of the team’s members were among the top 20 individual fundraisers, and the team won the award for most kilometers logged by a Corporate Team. This was also the third year in a row that CENTURY 21 The Professionals won the Top Corporate Fundraising Team Award, in the third year the team has participated.

Money raised from the event will help provide needed support to families with disabled children. It will also go towards Camp Horizon, a summer retreat designed to accommodate children with disabilities.

“The team concurred that they felt a huge feeling of accomplishment at having reached beyond themselves and done something really, really worthwhile,” said Bezzag. “The entire team is thrilled to have raised such a large amount of money and is very proud to be associated with Easter Seals and with such a great team of individuals!”