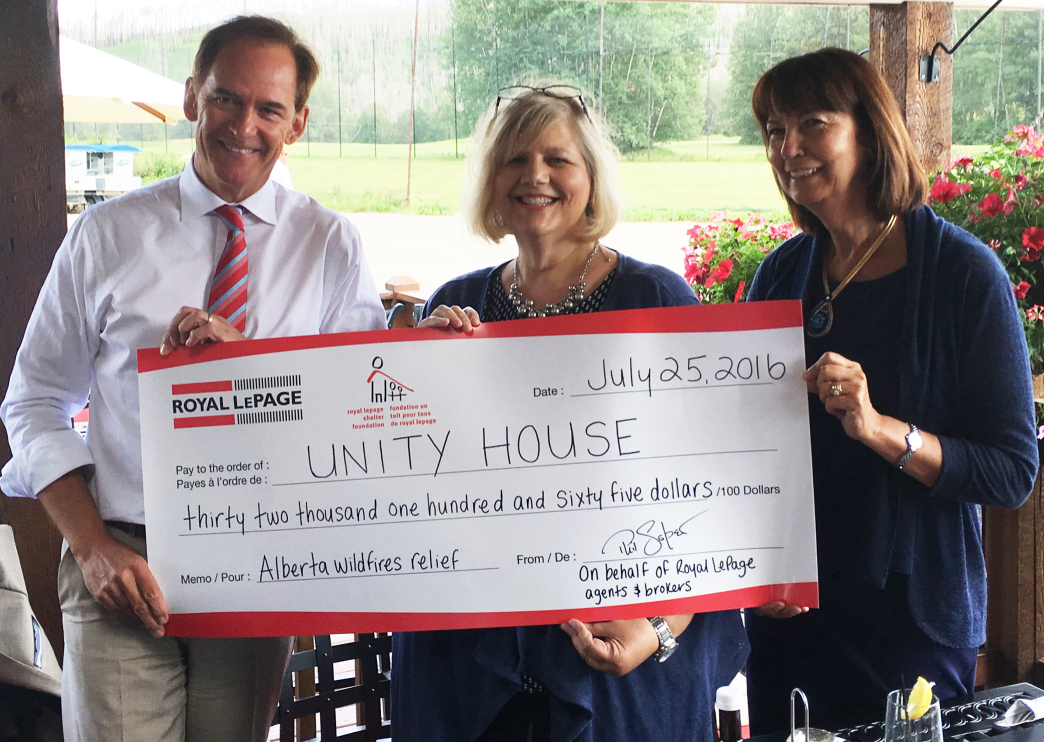 Royal LePage Real Estate Services, in concert with its charitable organization, the Royal LePage Shelter Foundation, is pleased to announce that it has donated more than $47,000 to Unity House, an emergency shelter serving abused women and their children, and the Canadian Red Cross to assist in the restoration of Fort McMurray.

Across the country, Royal LePage professionals banded together to raise funds to aid Fort McMurray residents displaced by the wildfires that roared through the city this May. In addition to individual contributions from Royal LePage brokers and sales representatives, many brokerages elected to earmark some of the proceeds generated from the Royal LePage Shelter Foundation’s flagship event, the National Garage Sale for Shelter, to Unity House. In honour of Royal LePage True North Realty in Fort McMurray, a longstanding and generous supporter of Unity House, the company raised approximately $32,000 for the emergency shelter.

So proud to be working with a company that gives back! Shelter Foundation and Fort McMurray are just a few examples! https://t.co/WZbntt17qT

In addition, Royal LePage made a corporate donation of $15,000 to the Canadian Red Cross in Alberta to assist in general rebuilding and restoration efforts in Fort McMurray.

“Canadians watched in horror as wildfires raged out of control in Northern Alberta, engulfing Fort McMurray, laying waste to homes and businesses and threatening the lives of many. As soon as the extent of the tragedy became evident, people from Royal LePage offices across the country began to reach out to me, asking simply, ‘what can we do?’. Our brand promise is ‘Helping you is what we do’  and it was in that spirit that the women and men of Royal LePage came together to raise funds with the hope that rehabilitation efforts in Fort McMurray will be accelerated, allowing many to close the book on one of the most trying chapters in the region’s history.”

“Due to the wildfires in the region, this year for the first time in many, we were sadly unable to participate in the National Garage Sale for Shelter, a fundraiser that contributes much needed support to Unity House, our local shelter,” said Marian Barry, broker/owner, Royal LePage True North Realty. “My team and I were truly overwhelmed by the staggering amount of support received from our Royal LePage colleagues across the nation, who stepped in to fill, and exceed, this need, raising funds that will go a long way in helping many women and children seeking shelter during this difficult time.”

For more information, see the news story as it appeared in Fort McMurray Today.