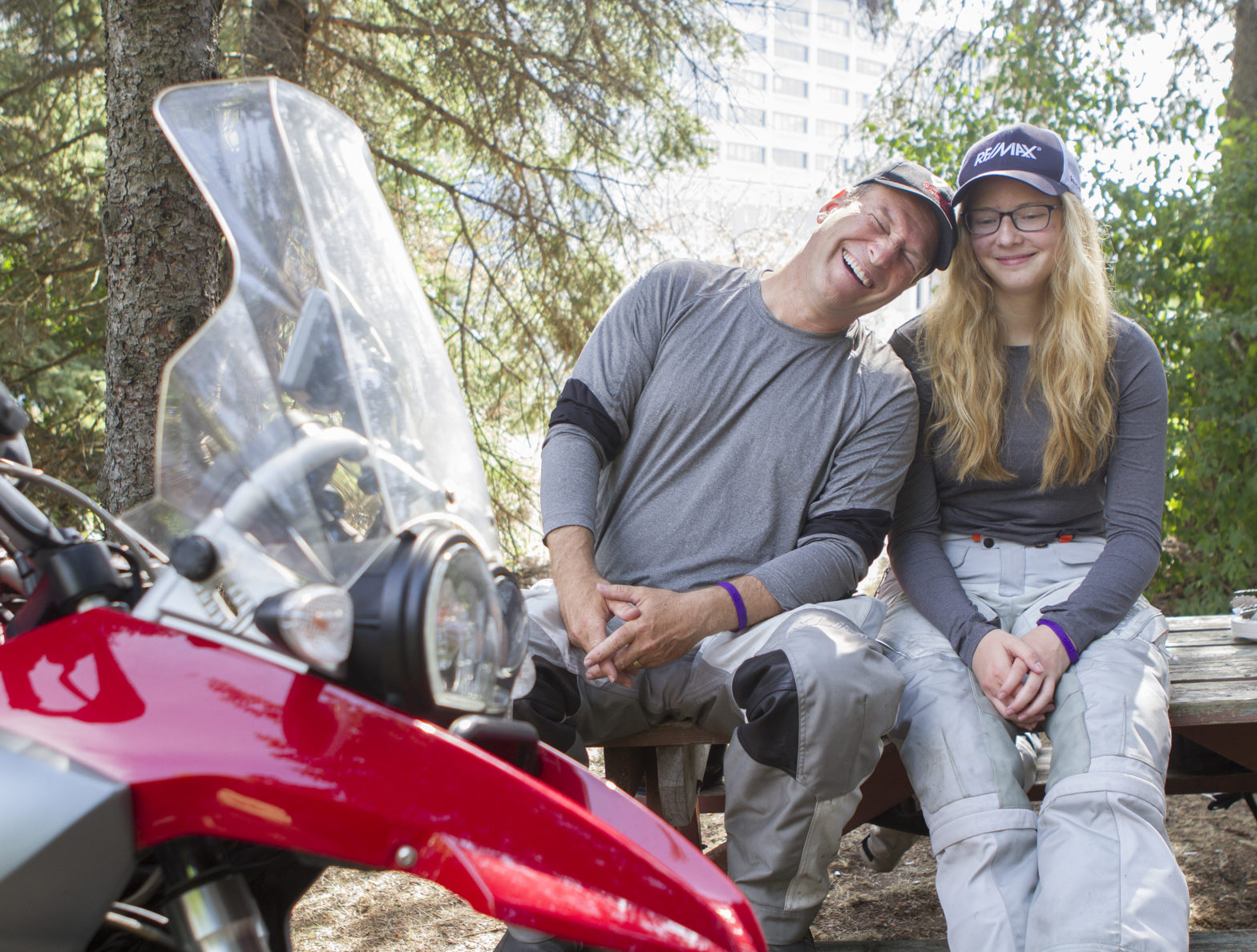 The RE/MAX REALTOR® from Wasaga Beach, Ontario and his 15-year-old daughter, Holly, do just fine without the BMW bike’s speakers blaring.

That’s because Bruce likes to feel the elements and be alone with his thoughts most of the time. He thinks about life — and a life taken far too short. This 9,400-km ride they’re on is in memory of Bruce’s daughter Alyssa, who tragically died in his arms at SickKids Hospital at just 20 days old in 1998.

“It brings me joy knowing that Alyssa is living on, but at the same time it’s really emotional for me,” Bruce told the Canadian REALTORS Care® Foundation. “Everyday something happens that brings me to tears.”

The silence, and the tears, are cathartic, he says.

“I was riding along one day — beautiful day, no wind, we had just ate — and I realized I was crying. Inside my helmet tears were streaming down my face and I was thinking about Alyssa,” he says with an uncontrollable smile forming in that moment. “You never fully get over the loss of a child, but these weren’t tears of sadness. It’s just a release.”

This isn’t meant to be a depressing story, Bruce stresses. The fundraising journey, dubbed Motorcycle for Miracles, is in celebration of all the lives the 14 Children’s Miracle Network hospitals across Canada have made better or saved.


Bruce owes a lot to them. Each one of his three daughters have benefited from CMN Hospitals, and although it can be painful to walk into the very same room at SickKids Hospital in Toronto where Alyssa untimely passed, the doctors in that wing are helping heal Holly’s eyes.

With this deep, rooted connection to CMN Hospitals (Bruce has been donating money from each real estate transaction since Day 1 through the Miracle Home program) the father-daughter duo is right in the middle of a 31-day-long road trip across Canada — their second long-distance fundraising road trip. In 2013, they rode from Canada to Costa Rica for CMN Hospitals and helped the Alyssa Rae Johnson fund eclipse the $100,000 mark. Before setting out on their journey this time, they managed to raise $30,000 thanks in large part to a $5,000 donation from RE/MAX Ontario-Atlantic regional head office.

The trip is also broken into 31 sections for the 31 days of August, coinciding with the RE/MAX Month of Miracles. Each section has a champion REALTOR® who has committed to the campaign. They receive video shoutouts and can sign the official Motorcycles for Miracles flag getting auctioned off at the end of their journey. In 2013, that flag was bought by RE/MAX regional head office for $30,000.

“It’s really important other REALTORS® see things like this happening. If you want to start a car wash for cancer or sell apples for Alzheimer’s, you can do it. RE/MAX was right behind us,” he says. “We’re all just families trying to get through life and if you can do something to make someone’s life easier through our job, then kudos. Go for it.”

During their stop in Ottawa on Aug. 9, representatives at the Children’s Hospital of Eastern Ontario welcomed Bruce for a small outdoor ceremony outside of a garden commemorating children’s lives.

“What Bruce is really doing for us is bringing awareness to all of Canada on how important it is to support your children’s healthcare,” says Vaia Dimas, of the Children’s Miracle Network. “Bruce has a personal story that so many people can relate to. It just goes to show how important and necessary the children’s hospitals are.”

Donate to Motorcycle for Miracles by clicking here.

Q&A with Bruce and Holly

We asked Bruce and Holly some oddball questions about how they make it through each day, living life out on the open road.

Canadian REALTORS Care® Foundation: What’s your go-to road trip song?
Bruce: We don’t use the radio, but we sing all the time.
Holly: We can’t really hear each other, but anything from Hamilton (the broadway musical).
Bruce: Yeah, we know it inside and out.
Holly: I just wish I had something to sing along to, besides my own insanity. I’ve memorized it so well. I know exactly what song starts at what minute.

Foundation: What’s the weirdest thing you’ve seen so far?
Bruce: Canada is pretty awesome, but I don’t know what would be the weirdest thing. Maybe the snoring bikers on the ferry?
Holly: They weren’t just snoring.
Bruce: (Laughs) OK, they were making other noises. But you could definitely tell they were in a gang. They were One Percenters.

Foundation: Whats your go-to food item.
Holly: Trail mix, for sure.
Bruce: We don’t carry much food: granola bars, trail mix, some peanut butter. We have a lot of Tim Horton’s cards.

Foundation: How many pitstops a day?
Holly: Many.
Bruce: We gas up every two-and-a-half hours. You really need to get up and stretch at that point.

Foundation: What are you looking forward to seeing the most?
Holly: The Rockies!
Bruce: Yeah, geographically, the Rockies.
Holly: I’m really excited for that.

Foundation: Are you getting any work done on the road?
Bruce: I’ve already sold three homes on the trip. I never stop. With electronic stuff like Docusign, it’s so easy to do that.