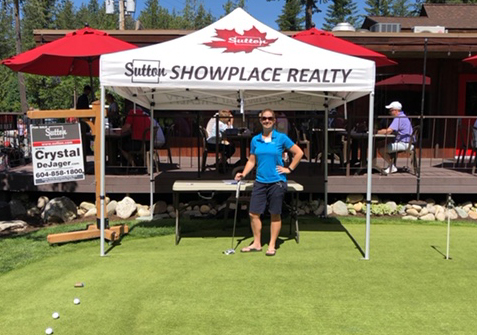 Sunshine, a chance to win a car and a jersey signed by Daniel Sedin greeted participants at the first-ever Swing into Spring charity golf tournament. The event, hosted by the Rotary Club of Chilliwack Fraser, raised more than $14,500 for the pediatrics unit at Chilliwack General Hospital and other charities. REALTOR® Crystal De Jager helped to organize the tournament and sponsored a putting contest with her colleagues from Sutton Showplace Realty.

“The event went great and we had super weather,” De Jager said, who spent much of the day volunteering at the putting green. “It was a lot of fun and apparently it was quite difficult. Only two people made a hole-in-one putt!”

Adding to the fun of the day, Swing into Spring awarded prizes for the best scoring team, who shot an impressive -11. The least lucky team, with a score of +11, was also awarded a prize. Regardless of the numbers, everyone felt like a winner for assisting multiple charities.

In addition to contributing to the pediatrics unit of the local hospital, this Rotary club recently announced their support of four grassroots programs: the B.C. Agriculture in the Classroom Foundation; Abbotsford Restorative Justice (to enhance restorative mentoring for at-risk youth); L.I.F.E. Recovery, residential housing for at-risk women; and JOSHUA House, an organization that houses men in need.

De Jager has been a member of the Rotary Club of Chilliwack Fraser for the past two years and said she is pleased the team at Sutton Showplace Realty (2015) joined her in sponsoring the putting green contest. Given the success of this first golf fundraiser, she said she expects the club will host Swing into Spring again in 2019.