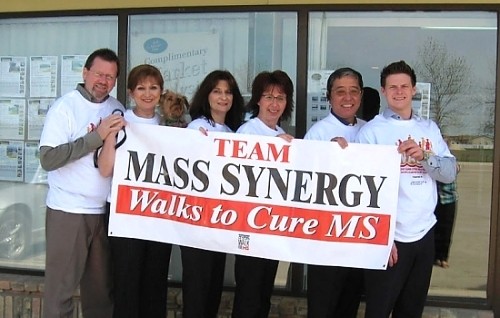 Agent, Lori Lund, spear-headed a team called Mass Synergy; participating in the annual MS Walk that was held on Sunday, April 29th, 2007, at the Forks and multiple locations across Manitoba. Multiple Sclerosis is a chronic and unpredictable disease of the central nervous system that consists of the brain and spinal cord.

There are a number of agents such as Lori, or loved ones of our REALTOR® family, who are affected by MS.

Mass Synergy, led by our caption, Lori Lind, will continue to walk annually in support of those in our real estate community, and our communities at large, until a cure is found. She would like to encourage those who are interested, to give her a call and sign up for next year’s walk, or to offer support by way of a sponsorship.

The top fundraiser on her team was broker/agent, Deb Goodfellow. Lori was able to lead her team as they managed to raise in excess of $13,000 towards a cure. Mass Synergy has been invited to0 the MS awards that are being held at The Delta Hotel on Thursday, June 21st, 2007.