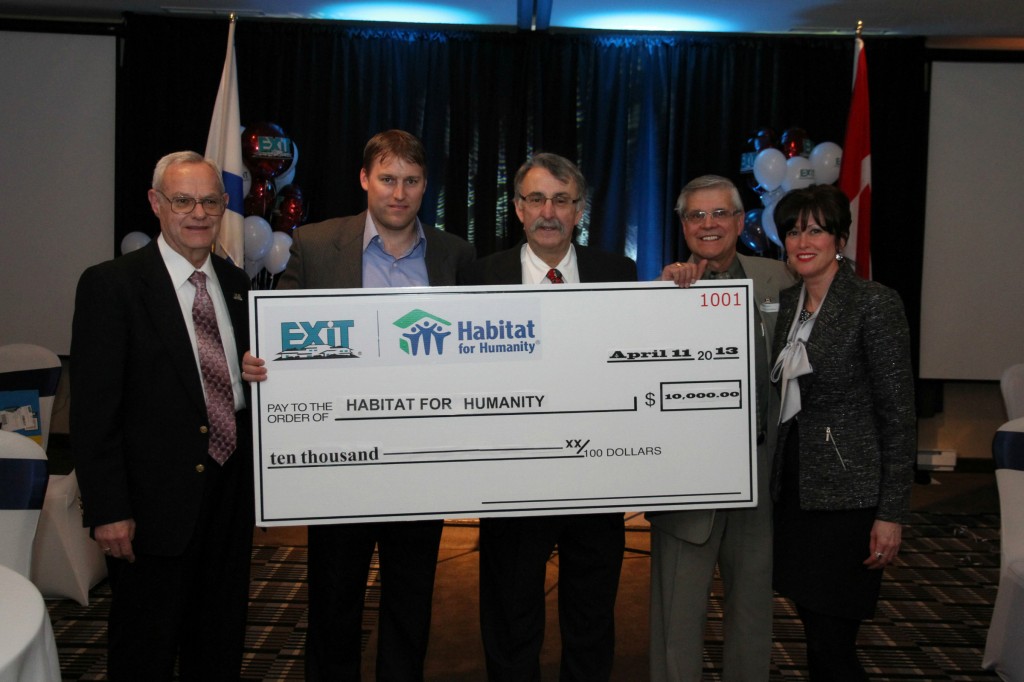 REALTORS® from EXIT Realty Inter Lake Help Raise Over $40,000 for Habitat for Humanity

The inaugural Habitat for Humanity Gala Dinner and Auction held on April 11, 2013, at the Best Western Plus Hotel and Convention Centre in Bridgewater, Nova Scotia was sold out weeks prior to the event. Dignitaries including the Honorable Stephen McNeil, Leader of the Opposition of Nova Scotia, Mayor of Bridgewater, David Walker, Mayor of the Municipality of Lunenburg, Don Downe and Mayor of Mahone Bay, Joe Feeney joined MLAs, councilors and business community leaders to support the fundraiser.

The elegant room appointments commensurate with that of a black tie big city event, created a sizzling first impression that was the backdrop for a night of entertainment and surprises. Guests were welcomed by a delightful musical interlude of harp and mandolin by Dave and Heather Abriel which was followed by a show-stopping Marilyn Monroe impersonator who kicked off the evening. The keynote speaker and live auctioneer was none other than the incomparable, beloved Maritimer, Bill Carr who performed at his best.

Jon Walker and Mark Seamone, Franchisees of EXIT Realty Inter Lake were hosts for the evening partnering with Robert Beaudreau, Chair for Habitat for Humanity South Shore Chapter, and Hank Middleton, Vice Chair for the non-profit. “Our goal was to raise $20,000 for Habitat throughout the course of the event. It was with tremendous pleasure that we were able to announce that the generosity of all of those who attended and many sponsorships and donation that were received drove us past the $40,000 mark, including a $10,000 donation from EXIT Realty Corp. International presented by Joyce Paron, President of EXIT’s Canadian Division.”

“To my knowledge, there has never been a charity event in our town that has raised this much money in one evening. We are incredibly thankful to everyone who attended and the large number of corporations and individuals who made donations. We were humbled by the number of supporters and the generosity of our community. With this kind of success out of the gate, we are excited about what we can accomplish next year,” says Jon Walker.