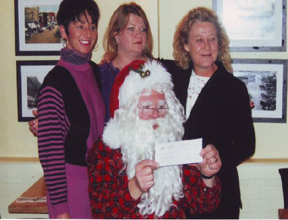 The Santa Claus Parade will march on thanks to the support of some REALTORS® in Chatham. In February, Realty House donated $1,000 to the parade and became its first corporate sponsor for 2007. The timing couldn’t have been better, with the city’s annual parade in financial dire straights. It had looked as though 2006 would be the final year for the beloved Christmas tradition.

“We wanted to make sure the parade had a future,” said Tim Cummings, a REALTOR® with Realty House who has been involved with the parade for the past 25 years. “The parade has a long-standing tradition with this town. The kids love it and it gets a tremendous crowd.”

The real estate company is hoping other local businesses will be inspired by its charitable effort to help keep the parade afloat for many more years to come. Last year’s parade drew a crowd of approximately 20,000 people in a city of 40,000. The Santa Claus Parade Committee approached Cummings to help keep the parade going, so he recruited his fellow agents, as well as Gerry Doher – the Broker and owner of Realty House. And so the challenge began. Whatever the agents in the office raised Doher said he would match by $500. With the support of local REALTORS® and an official corporate sponsor, Chatham’s favorite Christmas tradition will once again parade through the streets of downtown come December.