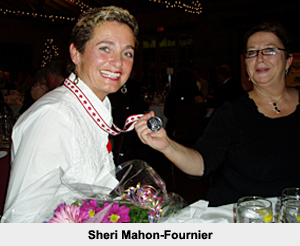 “It’s an honour to be recognized publicly,” said Mahon-Fournier. “It’s very emotional for me. You don’t think of the accolades and recognition that comes with (volunteering) so I am very honoured.”

Mahon-Fournier has played an active role in her community since she was a teenager. She grew up in Smiths Falls where she worked in Parks and Recreation for 10 years prior to becoming a REALTOR®. “I saw so many volunteers giving of their time and realized it’s what made the community tick and I wanted to be part of it,” she explained. “Being a volunteer helps keep a community vibrant.”

Recognition and awards have never been motivation for Mahon-Fournier to get involved with her community. To be given Perth’s highest honor is one she accepts with great humility and emotion.

A REALTOR® for almost 17 years, Mahon-Fournier is a Director and a past president of the Rideau St. Lawrence Real Estate Board. She has been involved with the Heart and Stroke Foundation for more than a decade and spent 13 years on the Perth Santa Claus Parade committee. She was Chair of that committee for eight years.

When it’s time for The Perth Festival of Maples, Lanark County’s annual spring event, Mahon-Fournier is there. She also volunteers with her children’s schools and sports teams.

“Being a volunteer helps keep a community vibrant,” said Mahon-Fournier. “The busier I am the more productive I am and the more organized I have to be, so it makes me work harder as a real estate agent.”

Sheri Mahon-Fournier is a REALTOR® with Coldwell Bank Settlement Realty in Perth.