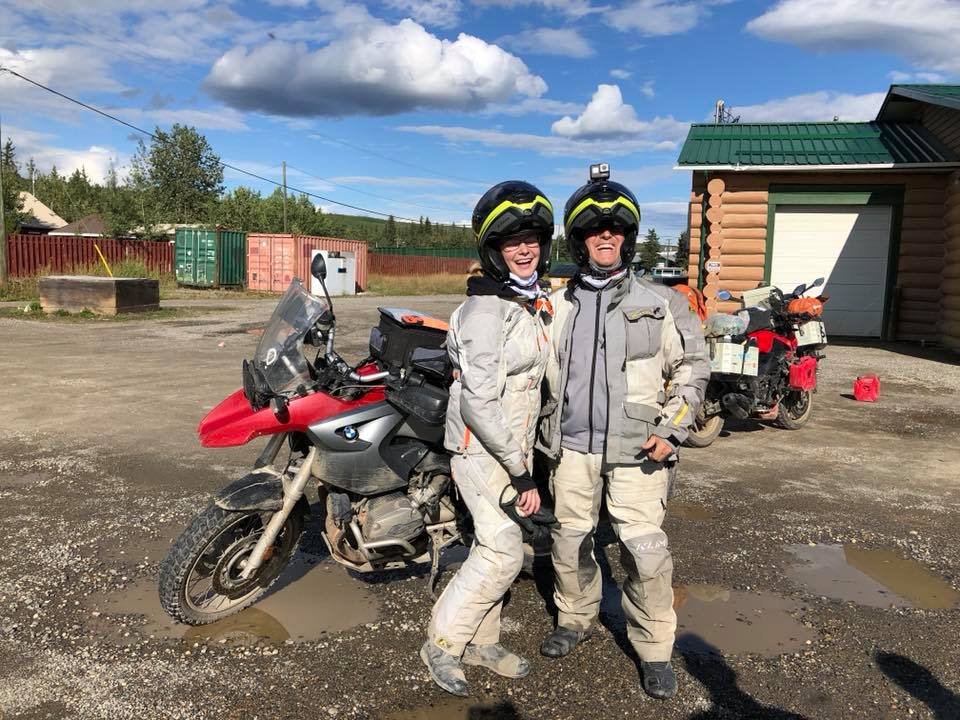 Bruce Johnson had ridden “Miracle the Motorcycle” all over North America, but it was on Day 1 of his recent six-month “Ends of the Earth” trek when he realized this would be the most challenging of his fundraising journeys.

“I’ve ridden well over 500,000 kilometres in my life and I’ve never had my confidence shaken like that,” Johnson, a REALTOR® with RE/MAX of Wasaga Beach Inc., recently told REALTORS Care®.

In order to connect one end of the earth with the other, Johnson and his daughter, Holly, were going to ride Miracle (a 2007 BMW R1200 GS) 26,500 km from Tuktoyaktuk, Northwest Territories, a small hamlet on the shores of the Arctic Ocean to Ushuaia, Argentina, the southernmost town in the world. Just like two previous fundraising journeys, the Johnsons set out to raise money for Children’s Miracle Network hospitals across Canada and the United States.

Their two previous rides raised a combined $300,000, so Bruce and Holly had high hopes for this ambitious adventure. They started with a $100,000 goal but raised that to $300,000 by the end of the ride, thanks in part to the nearly 100 RE/MAX “Champion Agents” who wholeheartedly answered Bruce’s request for donations by committing $2,000 each.

But here they were on Day 1, stranded at the top of the world with just a motorcycle and their gear to protect them in a vast, barren land where bears outnumber humans. The only road south was a soggy combination of mud and loose gravel, making it extremely difficult for Bruce to maneuver Miracle on one of Canada’s most treacherous roads.

And then it happened: a moment of uncertainty for both Bruce and Holly that would become one of their most talked-about experiences. Looking back, Bruce says, it lit the fire for rest of their journey. On that same rumpled road, the philanthropic adventurers came across a grizzly bear quite set on not yielding the only path south.

“We beeped and screamed at the bear, but she didn’t budge. We waited awhile and no other cars were coming, so I said to Holly, ‘I think we have to ride past the bear,’” Bruce recalls.

As they carefully skirted the bear, it turned and charged at the bike, narrowly missing Bruce and Holly. The moment was all caught on camera and the posted footage rapidly gained attention for both the Ends of the Earth Ride and its charitable cause.

While the ride threw many such curveballs their way, Bruce says they were never deterred.

“I remember thinking: ‘If our hardest day is behind us already, then that’s a gift.’ The theme for the whole trip seemed to be for us to get pushed close to our breaking point and then having something remarkable happen to turn the tide,” he says.

Like the time Miracle’s rear differential gave out. They had to ride with no rear brakes over 2,000 kilometres to Edmonton where BMW Motorrad Canada pitched in for the repairs and a much-needed tune up.

Or the instance when they were stopped by transit police in Colombia. After a lengthy negotiation, Bruce shared the purpose of their journey and convinced the officers to film a road safety video with him in lieu of a hefty fine.

And then there was the time Miracle’s motor blew in the Andes mountains of Ecuador. RE/MAX International stepped up to pay for the expensive repairs, essentially saving the trip. RE/MAX associates throughout the Americas were generous in cities along Bruce and Holly’s route, frequently hosting them, sharing meals, and inviting them to share their experiences and knowledge at their brokerages. It was through social media connections that the kindness of these former “strangers” would become a lasting memory for the riders.

A common theme of the ride seemed to be the tough environmental conditions. When you hear about thick forest fire smoke, extreme temperatures, high winds and heavy rain and flooding in countries that measure rain in feet rather than in inches, you may think this trip seemed gruelling, but both Bruce and Holly are quick to correct that assumption.

.@BruceJohnson and his 17-year-old daughter Holly left their everyday lives behind to travel over 17,000 miles by motorcycle on a months-long journey to raise money for @CMNHospitals! @MiraclesInfo #remaxhustle @CBSNews https://t.co/Tmz0lkjNP1

“As bad as it ever got for us, it’s nothing compared to what the kids in these hospitals go through every day,” Holly says. She would know as she’s been a SickKids patient for multiple eye surgeries.

Bruce and his wife, Mary, lost their first-born Alyssa Rae in December 1998, just weeks after she was born. They spent every waking minute at SickKids Hospital in Toronto as the incredible staff worked tirelessly caring for their daughter. Thanks to their heartwarming experience at such a heart-wrenching time, they vowed to give back to the hospital that showed them so much compassion.

Upon completing the “Ends of the Earth” ride in January, the Alyssa Rae Johnson Fund at SickKids Hospital had topped $400,000 and the Johnsons reached their $300,000 goal for the trip.

“When we crossed the finish line at the bottom of the world, I got a little choked up thinking about all the kids and the families we’ve met through these journeys,” Bruce says. “With children’s health issues, it’s so emotional. They did nothing to deserve this. Mother Nature can be so cruel; they are just kids and we need to do what we can to get them better and out the door. These kids could grow up to be future world leaders, company founders, or help cure cancer themselves.”

Bruce says he wants to thank everyone who has donated their time, money, expertise or couches to sleep on. A special shout out goes to all the “Champion Agents” that joined the endeavor. All of the money donated to the campaign goes to the Children’s Miracle Network hospital in your area, so, for example, if you donate from the Ottawa area, your donation money goes to the Children’s Hospital of Eastern Ontario.

And while the time away from home, family and work was challenging (Bruce says he was still selling homes while on the road and credits his team in Wasaga Beach, Ontario, for helping make everything possible), he hasn’t had enough of Miracle the Motorcycle.

“I’m not tired of her. We love Miracle. She’s going in for a well-deserved tune-up and maybe we’ll take her on the road again to do some shows. She’s not just a bike anymore, she’s become a symbol of hope.”