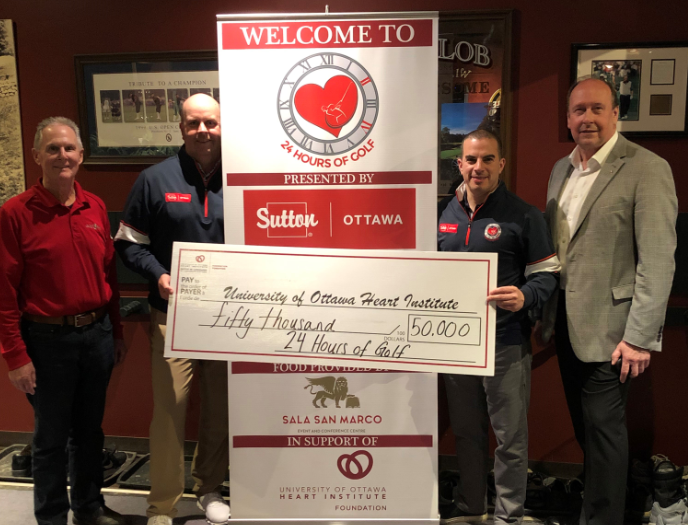 Lifelong friends and avid golfers Colin Zappia and Scott Johnson recently honoured their fathers with a unique indoor golf fundraiser. On April 26 and 27, at Golf-O-Max, they hosted the first annual 24 Hours of Golf event raising an astounding $50,000 for the Ottawa Heart Institute.

Colin’s father Tony passed away suddenly in April 2007 due to a heart attack as did Scott’s father Ronnie in November 2013. Golf was a favourite family pastime, so this seemed like a natural way to raise awareness and funds for heart research and care.

Colin has been supporting the Heart Institute by donating a portion of his commission since he started as a REALTOR® with Sutton in 2012. Then a few years ago, for Heart Month (February), Colin donated $500 per sale and Scott responded by matching his first donation.

“Scott reached out and said he had an idea to raise even more money,” says Colin. “We’d host an indoor 24 Hours of Golf at a facility called Golf-O-Max. I was part of a group called Leaders At Heart so I had some connections at the Heart Institute. When I pitched it to them, they loved the idea and were there to support every step of the way.”

“I approached the new owner of Sutton Ottawa, JP Chartrand, to see if he’d like to be our title partner and he didn’t hesitate. We raised $13,500 in total sponsorship and the event was born.”

Teams of 16 signed up, with those teams broken down into foursomes to play in six-hour blocks each for a total of 24 hours. “We didn’t see the number of golfers we’d hoped for this year, but we raised a ton of money and presented the Heart Institute with a cheque for $50,000 this past Friday night.”