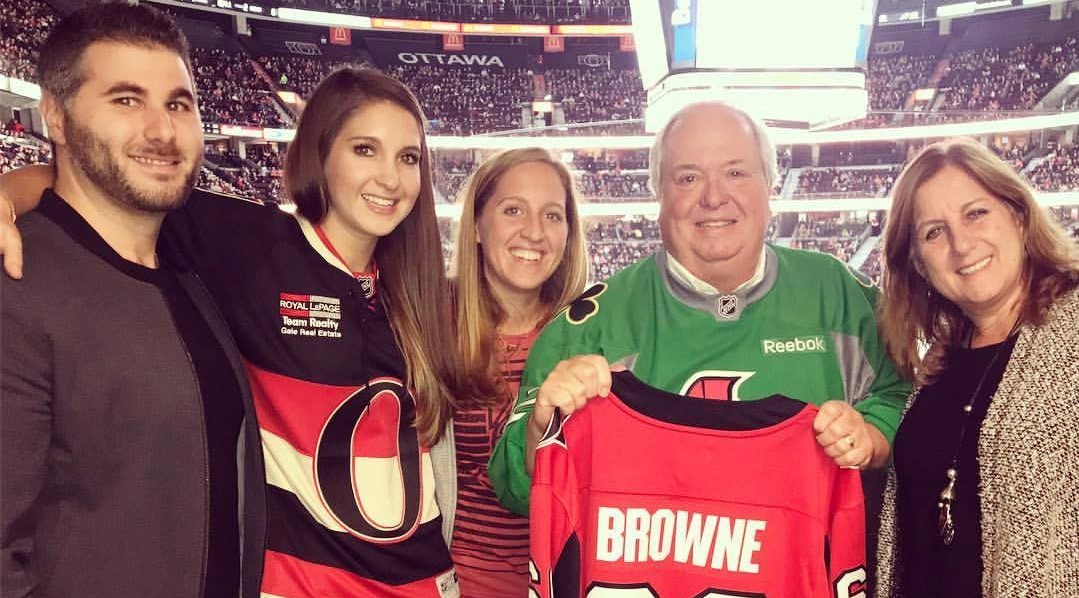 The coronavirus pandemic has been particularly hard for women and children facing violence at home. On any given day in Canada, 3,000 women and their 2,500 children live in an emergency shelter to escape family violence, according to Statistics Canada. But a Women’s Shelters Canada survey of 266 Canadian shelters released in late 2020 found that there’s been increased rates of violence in the home since the start of the pandemic. At the same time, the situation has limited the ability of shelters to provide services to clients.

That’s why Kent Browne, Broker of Record and Owner of Royal LePage Team Realty in Ottawa, decided to auction off his personal sports memorabilia collection to support women’s shelters that have been hard hit during this time. He held the online charity auction in May 2021 with 99 items, in honour of No. 99 himself: Wayne Gretzky.

“A big thing for me is raising awareness,” he said. “It’s tough times out there, so I thought this was a chance to give something back.”

Browne’s efforts and donations raised a whopping $17,500, all of which, through the Royal LePage Shelter Foundation, went to support women’s shelters across Canada chosen by the winning bidders. Where possible, Browne is personally delivering the cheques to the shelters and his sports memorabilia to the winning bidders. Michael Spooner & Son—Ottawa estate auctioneers and appraisers—donated the auction platform, so 100% of the money raised goes directly to the shelters.

Since the start of the coronavirus pandemic, however, live auctions have come to a grinding halt—and that means shelters dependent on funds raised during such events are suffering from a shortfall. “A lot of the shelters don’t get government funding, and in times of trouble people aren’t able to be as generous as they often are,” Browne said.

Aside from those funding shortfalls, there’s currently an overwhelming demand for shelters. “We also wanted to raise awareness of the struggles shelters find themselves in now—they’re having to put women and children up in hotels,” he said.

Items in the auction included everything from a Sidney Crosby hockey jersey to a fly fishing serving tray from the 1950s. A Gretzky jersey brought in the highest bid at $3,100, while an unopened box from the 2010 Winter Olympics went for $20 (Browne has no idea what was in the box). Browne also parted ways with a treasured limited-edition framed print of Brooke Henderson on canvas by artist Tony Harris, signed by the golfer herself, which went for $450. Buyers were from across the country—from Vancouver to Newfoundland.

“One of the things I do at all the auctions is make sure there’s something for everybody’s price range,” Browne said. “It’s reminding people that when they can afford to there’s a real need out there.”

It wasn’t easy to part ways with some of his memorabilia. Browne’s favourite hockey player of all time is Mark Messier, and he auctioned off a jersey from the last game Messier played in Ottawa’s arena as a New York Ranger, “so that was hard,” he said, of parting with the jersey. But the jersey raised $800 for an incredibly good cause.

The Royal LePage Shelter Foundation is Canada’s largest public foundation dedicated to funding women’s shelters and violence prevention programs. Participating Royal LePage agents donate a portion of their commissions or hold local fundraising events (sometimes for a named beneficiary), and the Shelter Foundation redirects those funds to shelters across Canada. Since 1998, it has raised a total of $35 million and helped fund 200 women’s shelters and national partners.

Kent Browne believes in the Royal LePage Shelter Foundation “deeply” and looks forward to turning more memories into further support and awareness for this important cause. “We’re going to do this again in the fall,” he added, “but with items that are easier to ship—getting people to think about the shelter again.”