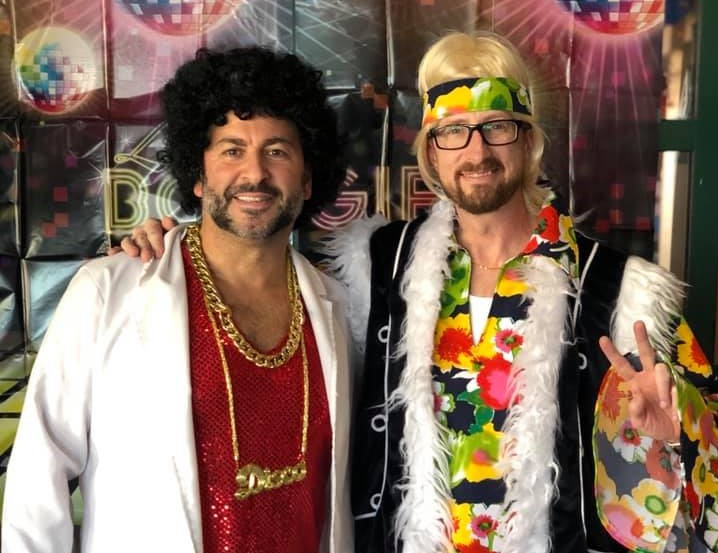 Ottawa REALTORS® Jason MacDonald and Nim Moussa have outdone themselves yet again in their latest Spare a Night for Queensway Carleton Hospital charity event. Spare a Night is an evening that combines hilarity with charity. Attendees leave their inhibitions at the door while they enjoy a night of bowling with plenty of cheerful antics and amusement. This year’s disco theme attracted an eclectic mix of 1970’s themed outfits and personalities that echoed memories of familiar characters of the bygone era, from John Travolta to the Bee Gees.

“They’re loads of fun. I’ve always preferred doing events. When you just give a donation, you don’t feel that sense of connection,” explains Jason. “I think that the sense of community is something we all could use a bit more of these days.”

Jason and Nim’s active approach to charity puts them front and center at their events. Naturally, the two led by example and neither were afraid to give their friends and colleagues a chance to share a laugh at their expense. They held nothing back in their performance, making Saturday Night Fever look like Pride and Prejudice.

“It definitely gives everyone a good laugh, but I think that’s important. I don’t think there’s any room for ego at a charity event because at the end of the day, it isn’t about us. Giving back goes beyond a monetary value, it needs your thought, your time, and your energy. That’s something our team truly takes to heart.”

Despite the festivities, nobody forgot the reason that brought them all together. The primary focus of the event was to draw attention to an often overlooked segment of the community. Jason and Nim know how prevalent the issues of mental health are in their community.

“As REALTORS®, both Nim and I see these issues firsthand. It’s something that has affected all of us at some point or another. Being a REALTOR® brings you further in tune with your community. My father always told me that charity begins at home. I feel thankful that my work gives me these opportunities to become a better person and do more for those around me.”

Spare a Night was a resounding success. It raised over $24,000 for the Queensway Carleton Hospital’s Hopes Rising initiative. This year brings the cumulative total of Jason and Nim’s efforts to over $60,000.