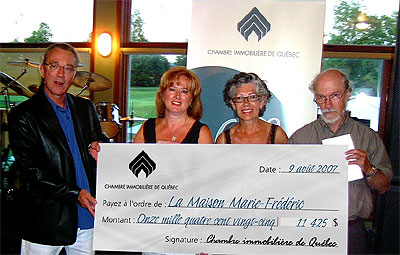 As part of its 60th anniversary celebrations, the Chambre immobilière de Québec and its 1,350 members donated to a community agency all the money collected during its 29th charity golf tournament.

Thanks to the team spirit of its real estate brokers and agents, on August 9, 2007, the Chambre immobilière de Québec made a $11,425 donation to Maison Marie-Frédéric , an organization devoted to providing integration, sheltering, and reintegration services to young men and women between 18 and 30 years of age, who are interested in developing a life-long project.