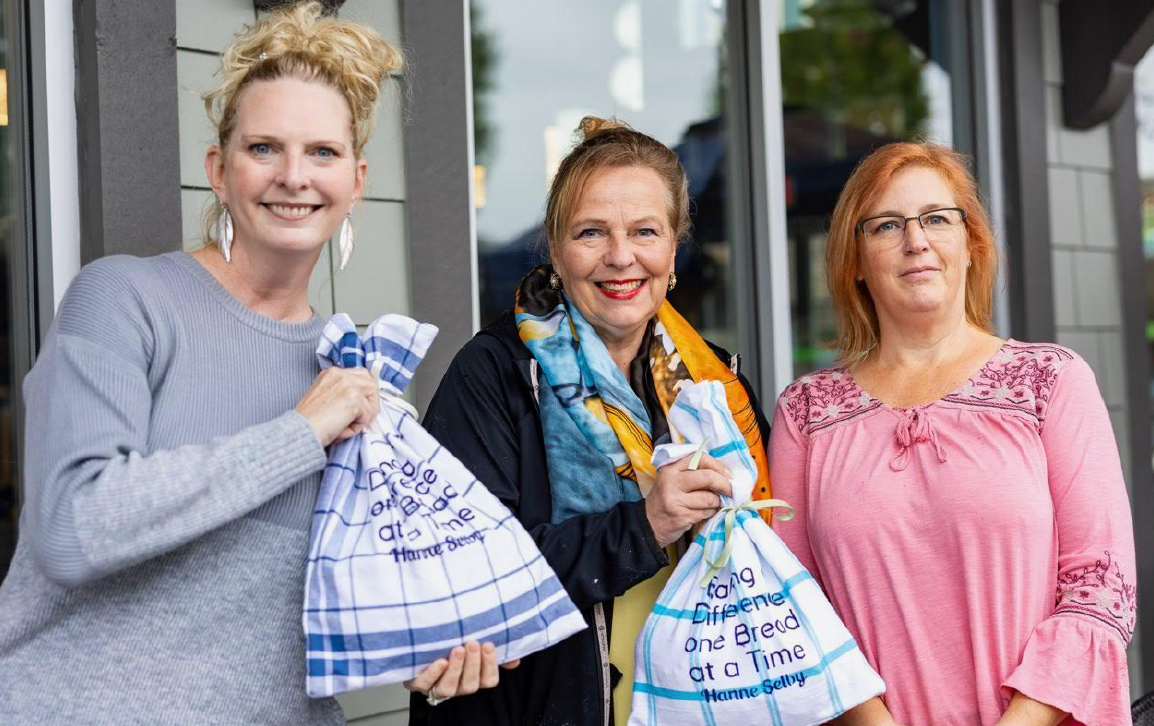 When B.C. REALTOR® Hanne Selby saw an elderly woman standing bereft in the aisle of her local supermarket at the start of the pandemic, staring at the empty bread shelves, she was inspired to help.

More than a year and 2,000 pounds of flour later, Selby’s bread baking and distribution program in the Fraser Valley region to help people in her community battle the stress of the pandemic is still going strong.

“The poor woman only had one can of soup in her buggy and was looking helpless in the bread aisle, so I asked her if there was anything I could do,” said Selby, who has lived and worked in Chilliwack for more than 35 years. “She desperately wanted bread but had no yeast or flour.”

Selby went home, baked a loaf of bread and delivered it the next day to the woman, who stood in her apartment with tears in her eyes and gave Selby a big hug.

“That’s how it began,” said Selby. “I could see people were distressed by the pandemic, whether they were living in million-dollar homes or out on the street, and I felt that baking bread, something almost everyone enjoys eating, was a way to help everyone in my community.”

Selby recalls giving a woman with cancer who was struggling to make ends meet a fresh loaf of bread to make her smile, and a couple who cried because receiving the bread meant so much to them. But she does indeed distribute to everyone, no matter their social status or financial or health situation.

Now, you can find Selby’s bread all across her home city. She bakes an average of four loaves a day and does her own bags, emblazoned with “Baking a Difference, One Bread at a Time.” She makes sourdough, white and wheat versions and delivers them herself, directly, hand-to-hand and door-to-door, packing up her car everyday as she goes to run errands or attend business appointments.

Selby was already well known in Chilliwack as someone who pitched in for charity. She and her parents had operated a successful local restaurant for many years. She participated in community funding drives with them, has helped to raise money for the heritage Ryder Lake Hall, and has participated as a director on the philanthropic Real Estate Foundation of BC, among other community-minded projects.

Her mother is 96 years old and still aims to help people out any way that she can, shares Selby.

“Doing for others is really a family tradition,” said Selby. “I was lucky that my parents were always givers and they taught me how important it is to help others in need,” said Selby.

It still runs in the family. Selby’s daughter and fire-fighter son-in-law, who live in East Vancouver, give back to the community in various ways, including making organic soap that they deliver to shelters to help the people there, she said. Her other daughter in Chilliwack buys food and takes it to homeless people so that they have something to eat.

When the pandemic hit, Selby saw that people were losing their homes, and she did her best to use her skills as a REALTOR® to assist, examining strategies with them, such as having other family members move in temporarily to help. The distress was widespread, impacting mental health as well as finances, and it seemed to put everyone in the community off balance.

As the pandemic wore on and supplies tightened in stores, she learned to make her own yeast, developed her own recipes and juggled consistently sterilizing her kitchen with baking and cooling the bread, all while attending to her duties as a REALTOR®.

“My aim has been to help people as much as I can and hope that they will pay it forward,” said Selby, who has seen evidence of this when people tell her that she has inspired them to do something for others. “I was never looking for a thank you, it was always about what I can do to help. When I see tears of joy and relief, it inspires me to do even more.”

On the day she was interviewed for this story, she was getting ready to turn on her oven afterwards.

“I bake seven days a week, though I may consider taking a week off soon,” said Selby. “Now I’ve got to go pick up more flour.”